Masonic Symbols and the LDS Temple

By Sandra Tanner
In the Spring of 2002 the LDS Church completed its reconstruction of the Nauvoo Temple in Illinois. It was originally built in the 1840's but was destroyed after the Mormons abandoned the town. Due to the publicity and photos regarding this new temple many people have asked about the symbols on the building. 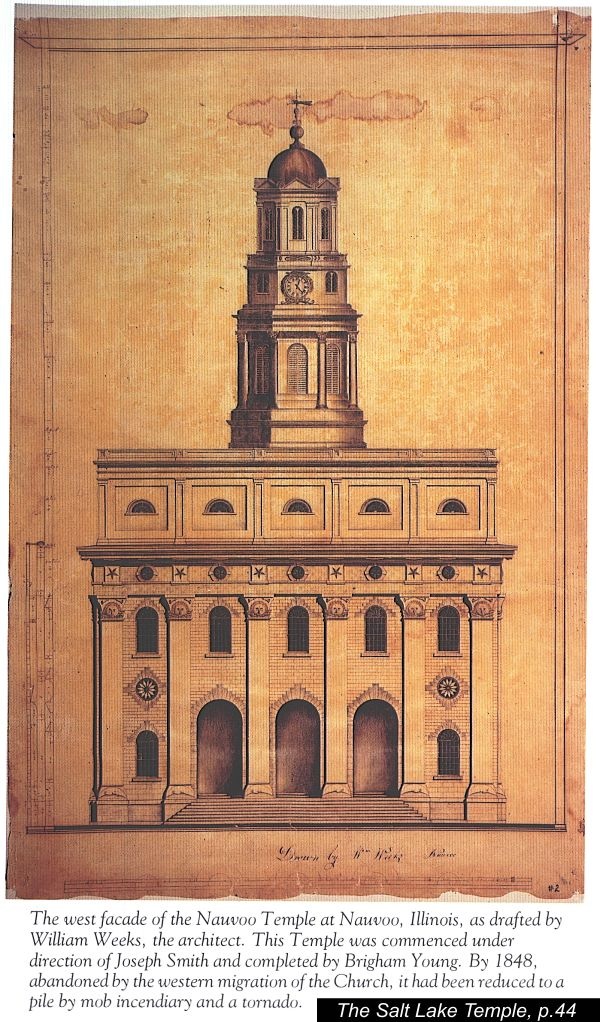 To understand the symbols one must first know something of Joseph Smith's involvement with Freemasonry. Joseph's brother, Hyrum, had been a Mason since the 1820's. Many other members of the LDS church, like Brigham Young, were Masons before they joined Mormonism. LDS historian Reed Durham observed:

"By 1840, John Cook Bennett, a former active leader in Masonry had arrived in Commerce [Nauvoo] and rapidly exerted his persuasive leadership in all facets of the Church, including Mormon Masonry. ... Joseph and Sidney [Rigdon] were inducted into formal Masonry...on the same day..." ("Is There No Help for the Widow's Son?" by Dr. Reed C. Durham, Jr., as printed in Joseph Smith and Masonry: No Help for the Widow's Son, Martin Pub. Co., Nauvoo, Ill., 1980, p. 17.)

"I have attempted thus far to demonstrate that Masonic influences upon Joseph in the early Church history, preceding his formal membership in Masonry, were significant....In fact, I believe that there are few significant developments in the Church, that occurred after March 15, 1842, which did not have some Masonic interdependence." (Joseph Smith and Masonry: No Help for the Widow's Son, p.17)

The History of the Church records Smith's entrance into the Masonic lodge in 1842:

"Tuesday, 15.—I officiated as grand chaplain at the installation of the Nauvoo Lodge of Free Masons, at the Grove near the Temple. Grand Master Jonas, of Columbus, being present, a large number of people assembled on the occasion. The day was exceedingly fine; all things were done in order, and universal satisfaction was manifested. In the evening I received the first degree in Free Masonry in the Nauvoo Lodge, assembled in my general business office." (History of the Church, by Joseph Smith, Deseret Book, 1978, Vol.4, Ch.32, p.550-1)

The next day Smith recorded:

The Mormon involvement in Freemasonry reached its heights during the early 1840's in Nauvoo. In the Encyclopedia of Mormonism we read:

"The introduction of Freemasonry in NAUVOO had both political and religious implications....Eventually nearly 1,500 LDS men became associated with Illinois Freemasonry, including many members of the Church's governing priesthood bodies—this at a time when the total number of non-LDS Masons in Illinois lodges barely reached 150." (Encyclopedia of Mormonism, vol.2, p.527)

The Salt Lake Tribune (May 4, 2002, p.C3) printed a picture of the original Nauvoo temple weather vane, which shows the Masonic symbol of the compass and square above the angel. Reporter Peggy Stack wrote:

"Every detail of the historic Nauvoo Temple was reconstructed [in the new Nauvoo temple] meticulously with one exception: the flying angel weather vane that graced the top of the 19th century Mormon edifice.

"In its place is the gold-leafed Angel Moroni, first used on the Salt Lake Temple,...

"Some speculate that the horizontal angel, with its compass and square, may be too closely associated with Masonic rituals for modern Mormons." (Salt Lake Tribune, May 4, 2002, p.C3) 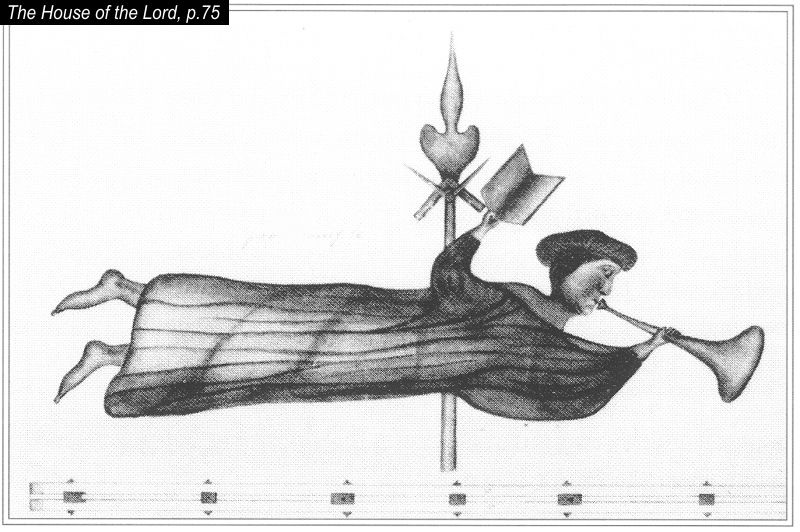 Original architect's drawing of the Nauvoo Temple weather vane. Notice the compass and square above the angel.
Reed Durham observed:

"There is absolutely no question in my mind that the Mormon ceremony which came to be known as the Endowment, introduced by Joseph Smith to Mormon Masons initially, just a little over one month after he became a Mason, had an immediate inspiration from Masonry.... 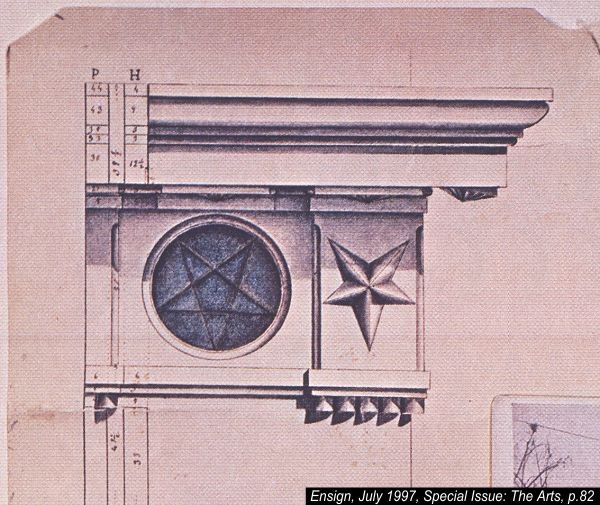 Architect's drawing of the stars for the Nauvoo Temple.

"It is also obvious that the Nauvoo Temple architecture was in part, at least Masonically influenced. Indeed, it appears that there was an intentional attempt to utilize Masonic symbols and motifs. The sun stones, and the moon and star stones, were examples. An additional example was the angel used on the weather vane on the top of the Temple. [Above the angel] is a beautiful compass and square, in the typical Masonic fashion." (Joseph Smith and Masonry: No Help for the Widow's Son, p.18)

The compass and square as used in Masonry.
Additional details of the Nauvoo temple symbols and pictures of the building are in the Deseret News 2001-2002 Church Almanac (see pp.120-141). On page 135 of the Almanac is a photograph of one of the original sunstones that were placed at the top of the columns around the outside of the temple. A photo of a sunstone is also in Fawn Brodie's book, No Man Knows My History, p.298(b). 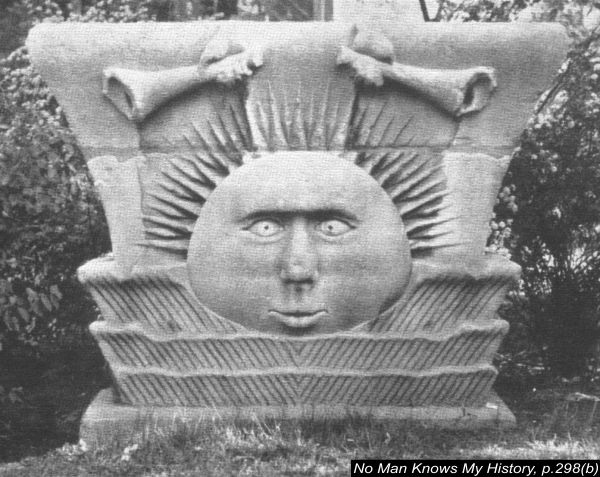 One of the original sunstones from the Nauvoo Temple.
The Nauvoo sunstone, with its human face, is similar to the Masonic depictions of the sun. Below is an illustration from the Masonic book, The Craft and Its Symbols, p.75:

Masonic symbols have been pictured and discussed in a number of books. Albert Pike, in his book, Morals and Dogma of the Ancient and Accepted Scottish Rite of Freemasonry, discusses the various Masonic symbols and their meaning.

In the book The Craft and Its Symbols: Opening the Door to Masonic Symbolism, by Allen E. Roberts, p.11, is a drawing of the Masonic apron presented to President George Washington by Lafayette The symbols on the apron, which were later used by the Mormons, include a beehive, all-seeing eye, compass and square, and the sun, moon and stars.

The Masonic Monitor, in 1820, had an illustration of the symbols of Freemasonry. This drawing is very similar to Washington's apron. 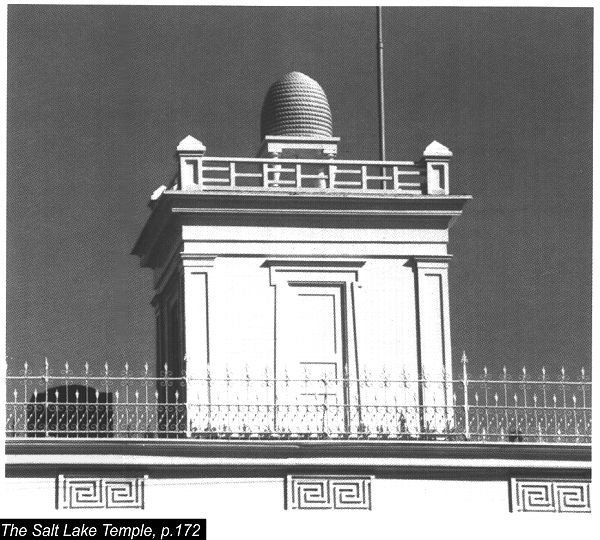 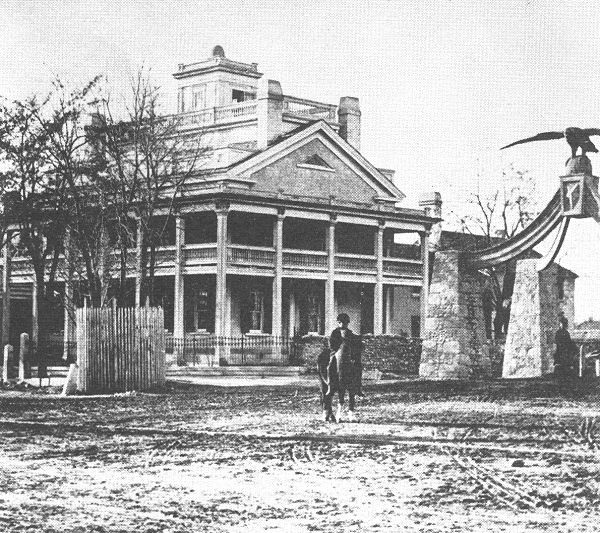 Beehive House with Eagle Gate next to it.
The beehive is also displayed on the doorknobs of the Salt Lake temple.

One of the brass doorknobs in the Salt Lake Temple displaying the beehive.
However, most people are not aware that the beehive was a symbol of Masonry years before Joseph Smith started his church. Masonic historian Allen E. Roberts explains:

"The Bee Hive, Masonically, is an emblem of Industry....When and why the hive of the bee entered Freemasonry as a symbol no one knows....In the book, The Early Masonic Catechisms, the bee in Masonry is mentioned as early as 1724..." (The Craft and Its Symbols, by Allen E. Roberts, Macoy Pub., 1974, p.73)

While many people are aware of the symbols used on the Salt Lake temple, they were also used on other LDS buildings in Utah (see "Where Are All The All-Seeing Eyes?", Sunstone Magazine, vol.10, no.5, May 1985).

"Even after the turn of the century and the abandonment of polygamy, the same comparison [to Masonry] was made. The First Presidency stated in a message on October 15, 1911, that '[b]ecause of their Masonic characters, the ceremonies of the temple are sacred and not for the public.'

"Mormon use of Masonic symbols has also been publicly acknowledged. Mormons were hardly discreet in their depictions of symbols long associated with Freemasonry...including the square, the compass, the sun, moon, and stars, the beehive, the all-seeing eye, ritualistic hand grips, two interlaced triangles forming a six-pointed star...and a number of other Masonic symbols on endowment houses, temples, cooperatives, grave markers, tabernacles, church meetinghouses, newspaper mastheads, hotels, residences, money, logos, and seals." ("Similarity of Priesthood in Masonry": The Relationship between Freemasonry and Mormonism, by Michael W. Homer, Dialogue: A Journal of Mormon Thought, vol.27, no.3, Fall 1994, p.73) 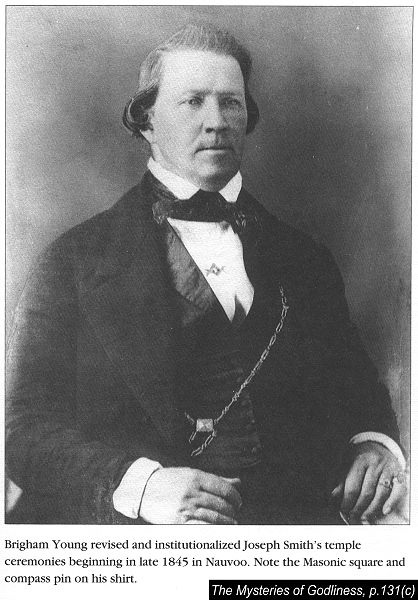 Even after the Mormons came to Utah, Brigham Young continued to wear his Masonic pin displaying the compass and square.
In addition to these symbols, the LDS Church continues to use the up-side-down, five pointed star. The newly completed Nauvoo Temple has numerous windows using it. For pictures see (off-site links):


(Editor's Note: these links to the nauvoo temple no longer work, but I was still able to extract them using the Internet Archive's "Wayback Machine" https://archive.org/web/.)
The inverted star was also used on the Salt Lake temple above the front doors, 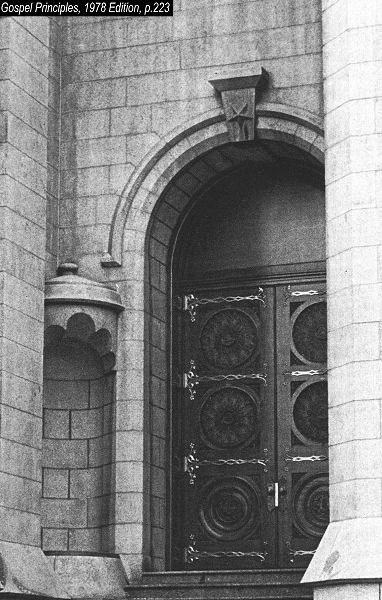 above the upper arched windows on the north and south sides, on the Eagle Gate monument (over State Street and South Temple in Salt Lake City), 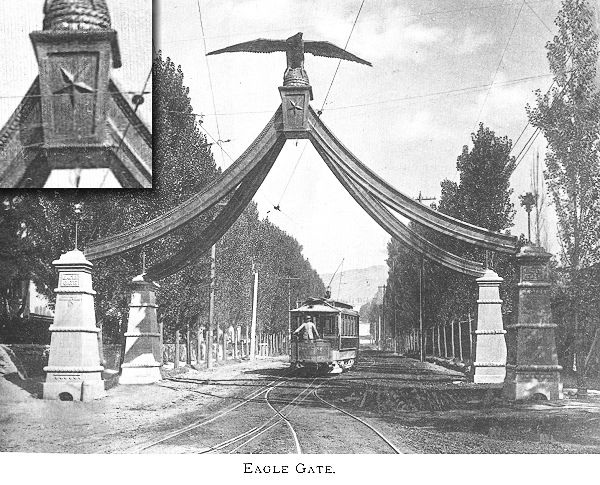 on the planter boxes in front of the statue of Christ in the Salt Lake Visitors Center, 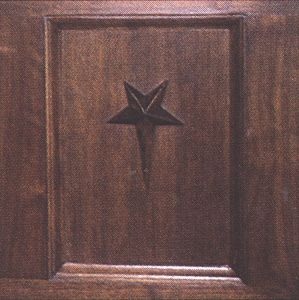 and on the front entrance, upper left-hand corner, of the LDS Historical Museum (west of temple square). 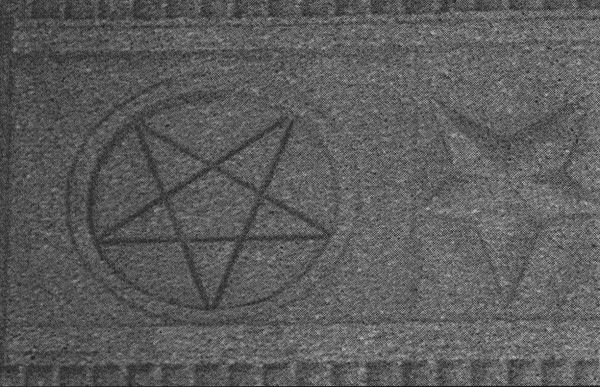 While the upside-down star is used in Masonry, it is also used by Satanists.

Also, on the LDS temple undergarment (worn daily by LDS faithful) are embroidered the compass and square. This would look like small zigzag stitching to form a "V" on the left breast and a "L" on the right breast of the garment. There is also a small stitched line at the bellybutton and the right knee. These are on both the men's and the women's underwear. The garment is to be worn daily to remind the Mormon of the covenants made in the temple.

Since the LDS Church rejects the use of the cross as a religious symbol, one is left to wonder why they would adopt symbols used by the Masons and Satanists?

When trying to explain the similarities between Mormonism and Masonry, one LDS author wrote:

"Masons who visit the Temple Block in Salt Lake City are impressed by what they call the Masonic emblems displayed on the outside of the Mormon Temple.

"Yes, the 'Masonic emblems' are displayed on the walls of the Temple—the sun, moon and stars, 'Holiness to the Lord,' the two right hands clasped in fellowship, the All-seeing eye, Alpha and Omega, and the beehive. Masonic writers tell us that the Mormon Temple ritual and their own are slightly similar in some respects.

"Without any apologies we frankly admit that there may be some truth in these statements." (Mormonism and Masonry, Introduction, by E. Cecil McGavin, Bookcraft, 1956)

"In the diary of Benjamin F. Johnson, an intimate friend and associate of Joseph Smith, it is recorded that 'Joseph told me that Freemasonry was the apostate endowment, as sectarian religion was the apostate religion.' Elder Heber C. Kimball, who had been a Mason for many years, related that after Joseph Smith became a Mason, he explained to his brethren that Masonry had been taken from the priesthood." (Mormonism and Masonry, p.199)

The problem with Mr. McGavin's position is that neither the Masonic or Mormon rituals can be shown to date to King Solomon's temple. In fact, most historians place the beginning of Freemasonry in the 1700's. LDS author Michael Homer wrote:

"Prior to 1860 most Masonic writers accepted the legends of Freemasonry with claimed that it originated in antiquity. Although these claims were challenged by most anti-Masonic writers in the United States,...most Masonic writers refused to discount these claims until 'a school of English investigators' began to evaluate lodge minutes, ancient rituals, and municipal records. Eventually this movement...debunked the notion that the rituals practiced in Speculative Freemasonry originated before the sixteenth century. Gould and others argued that the best evidence indicated that Operative Freemasonry originated with trade guilds in the Middle Ages and that the development of Speculative Freemasonry, with ceremonies and rituals similar to those practiced today, began in the seventeenth century....the rituals of Freemasonry have never been static, but have evolved both in time and place. For example, only post-1760 rituals included separate obligations for degrees in conjunction with signs, penalties, tokens, and words, the form found in most subsequent rituals and the same format followed in the Mormon temple endowment." ("Similarity of Priesthood in Masonry," Dialogue: A Journal of Mormon Thought, vol.27, no.3, Fall 1994, pp.103-104)

Since Freemasonry dates to the 1700's and Joseph Smith was a Mason before he introduced the LDS temple rituals and built the Nauvoo temple, one is forced to conclude that the similarities between the two groups are due to Smith borrowing elements from Masonry.

For more information see our page: Captain Morgan and the Masonic Influence in Mormonism.